Maryland developer kicks off work on premiere project in Triangle 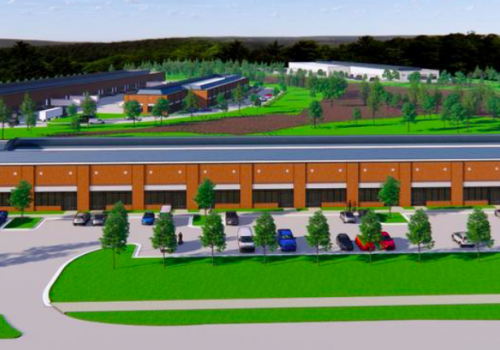 A developer looking to establish a foothold in the Triangle has begun work on its premier project in the region even as some developers hit the brakes on new projects amid the pandemic.

Baltimore-based Merritt Properties has begun work on Merritt TW Crossing in Durham. Plans for the project call for 283,000 square feet of industrial space across 50 acres at the southwest corner of TW Alexander Drive and S. Miami Boulevard east of Hwy. 147 near Research Triangle Park.

The development will include four buildings featuring flex and industrial space with building four currently underway. Merritt plans to build additional buildings in reverse numerical order as tenants sign on for space. Construction on much of the park is beginning speculatively, but company representatives say there is plenty of interest.

“Activity has been strong,” says Keith Wallace with Merritt's team in the Triangle. “We sent the first lease document out today … for 8,000 feet.” The company did not reveal who the first potential tenant is.

The company has a virtual walkthrough of the industrial park posted on its website.

The work comes as some developers slow plans for projects amid the ongoing pandemic. Merritt, however, is forging ahead in the Triangle and elsewhere, often bypassing investors by self-funding projects, the company says.

“For these projects we’ve always been self financed, so we’re not worried about that,” says Nathan Robb with Merritt. “If anything it might improve our financing ability.”

CBRE in Raleigh will oversee leasing for the Merritt TW Crossing in partnership with Merritt.

In addition to Merritt TW Crossing, the company has filed plans for the Merritt Capital Business Park, a 452,500-square-foot industrial development with plans calling for up to seven new buildings ranging in size from 30,000 to 85,000 square feet. The site is situated off Ligon Mill Road in Wake Forest.

The company opened an office in the Triangle early this year. It's staffed by a six-person team based in a Spaces coworking office in the new Crabtree Terrace building across from the Crabtree Valley Mall.

"The Research Triangle region represents a strategic growth market for our company,” Robb Merritt, president of Merritt Properties, previously said. “Not only is it one of the fastest-growing areas in the U.S., the region features strong fundamentals such as positive job growth, an expanding population base and a highly educated workforce.”

Merritt Properties was established in 1967 and has properties in Virginia and Maryland.