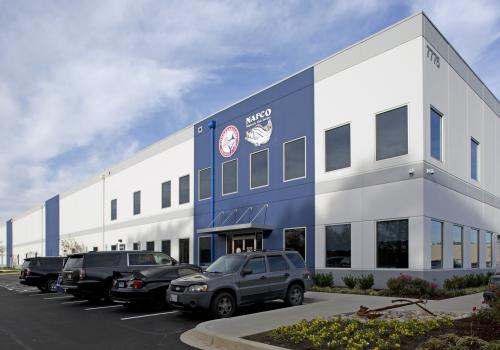 NAIOP-Maryland has named Merritt Construction Services and Merritt Properties the winners of four Awards of Excellence for the Best Low to Mid-Rise Office, the Best Medical Office, the Best Retail Building and the Best Build-to-Suit Warehouse. In addition, Merritt’s president, Robb Merritt, was honored with the F. Patrick Hughes Legislative Award.

Merritt Construction Services received three of the awards for the following third-party projects:

The newly renovated 16,500-square-foot office for Agora, Inc. features high-end office finishes, two new ornamental stairs and a new roof monitor that allows more natural light to enter the top floor. The four-story building required a complete gut of the existing medical space for Agora’s new state-of-the-art office. Built in the early 20th century, the building’s age and condition posed significant challenges in order to reinforce the building’s structural support, while salvaging much of the original historic features. This is the third award Merritt has won for this particular project. Previous awards include the 2015 Historic Preservation Award from Baltimore Heritage and a 2014 Award of Excellence from the Associated Builders and Contractors.

Merritt’s work for GBMC was a multi-phase effort, totaling over 13,000 square feet. The overall scope of work included updated offices, the relocation of their Respiratory Therapy area, the renovation of their Clinical Pharmacy and a new state-of-the-art clean room that is USP 797 compliant. In addition, Merritt renovated their neurology suite, which allowed GBMC to expand the department by sixty percent.

Merritt’s president, Robb Merritt, was also honored with the F. Patrick Hughes Legislative Award for his dedication to NAIOP MD’s Legislative Committee. Described by Tom Pilon, Senior Vice President of Development at St. John Properties, as an indispensable advocate, Robb’s extensive knowledge of the commercial real estate industry and his commitment of time and resources to NAIOP MD have been critical to the group’s legislative efforts to ensure the industry’s voice is heard in Annapolis.

About NAIOP-Maryland
NAIOP-MD is the statewide chapter of NAIOP, the leading trade association for developers, owners, investors and other professionals in industrial, office and mixed-use commercial real estate.  It has more than 340 members, comprised of individuals working for real estate development companies, brokerage firms and affiliated companies such as financial institutions, architectural firms and engineers.

About Merritt Properties
As an established market leader with more than 40 years of experience and success, Merritt Properties has an unmatched reputation for our commitment to our customers and the communities we serve. With 16 million square feet in more than 70 locations, Merritt owns and manages the largest privately held commercial real estate portfolio in the Baltimore/Washington region.