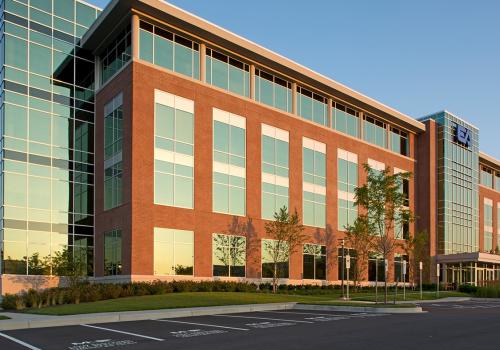 In honor of Earth Day tomorrow, here's one example of Merritt's efforts to build green:

In 2012, Merritt transformed an outdated warehouse site into a showcase for green building. With the goal of receiving LEED Platinum certification, several green techniques and attributes were put in place from start, beginning with reusing the crushed concrete, masonry and asphalt from the existing building and parking lot as aggregate for the new site. In fact, throughout the demolition of the existing facility and construction of the new building, more than 95 percent of all waste was recycled.

Among the building’s many green features, the innovative underfloor air distribution (UFAD) system offers the most tangible benefit to building occupants. Unlike traditional overhead systems, the UFAD delivers fresh air directly to the breathing zone and allows employees to independently adjust the airflow within their workspaces to provide greater thermal comfort. The UFAD’s modular access flooring also facilitates data cabling and accommodates an array of workspace configurations.

In addition to the UFAD, Merritt utilized the following green building strategies in the construction and operation of Schilling Green II:

Now more than 90% occupied, Schilling Green II has been a tremendous economic success for Merritt. Not only has the Class A office building achieved LEED‬®-CS Platinum certification from the U.S. Green Building Council, but it has been recognized by both NAIOP, the Commercial Real Estate Development Association, and the Associated Builders and Contractors for its excellence in design and construction: