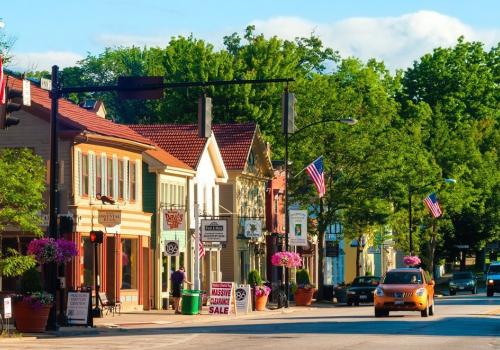 Merritt Properties provides home to many businesses as a company that owns and leases over 16 million square feet of commercial real estate in the Baltimore/Washington area. We are lucky to have a handful of independent retailers that have set up shop and made themselves at home in our buildings.

The company began in 1884 when John Jeppi and his two brothers emigrated from Sicily to Baltimore and opened a produce stall at the old Hanover Market. This produce business soon evolved into a peanut-roasting company and their business boomed in the Baltimore harbor area. The company passed through several hands over the years before setting into the hands of the Pavlos family in 1974. During Jimmy Carter’s presidency, “The Peanut King” sent nut sales skyrocketing and Jeppi Nuts was able to expand into manufacturing and selling an assortment of nuts and candies.

With well over a century of operation under its belt, Jeppi Nut & Candy Company remains a family-run retailer with younger generations of the Pavlos family still owning and operating the business. The store was relocated from its downtown home on North High Street to Merritt’s Aylesbury Business Center in Timonium in 2003.

Also sharing the space over on Aylesbury Road is Baltimore Coffee and Tea Company, a business that has been supplying Baltimore its cup of Joe since 1895. This facility is home to the company’s Mid-Atlantic roasting plant as well as a storefront serving breakfast, lunch, pastries, gifts and, of course, coffee. With over 120 types of freshly roasted coffee and 1,000 varieties of tea, Baltimore Coffee & Tea Co. caffeinates stores and cafes across North America and Europe.

Want some ethically cultivated beans? Baltimore Coffee is certified organic and has even been certified by the Smithsonian Institution to roast and distribute Bird Friendly Coffee. Enjoy a morning cuppa’ with Baltimore Coffee & Tea knowing that your coffee is pesticide-free and helps to maintain bird habitats!

Our last Merritt indie retailer, Popsations Gourmet Popcorn, is also at our Aylesbury Road location (it smells great over there). The idea for Popsations started with founder Robin Garrison's fond memories of returning from family vacations with a giant tin of caramel popcorn. In 2011, after years of testing flavors, Robin opened up shop and began popcorn production at their current location in Aylesbury Business Center. Since then, Popsations has grown to sell their popcorn in 50 retail stores, including their own production facility, as well as online.

Popsations makes a variety of popcorn flavors from Classic Caramel to other renditions including dark, milk, and white chocolate drizzle, cheddar, and even Crabby Caramel with Old Bay. Be warned, the popcorn is deliciously addictive!